COVID-19: Due to the current pandemic we have had to temporarily alter our opening hours and the way we run certain areas of the business. For up-to-date information on our services and opening hours please visit shop.isbisterbros.co.uk

COVID-19: Due to the current pandemic we have had to temporarily alter our opening hours and the way we run certain areas of the business. For up-to-date information on our services and opening hours please visit shop.isbisterbros.co.uk 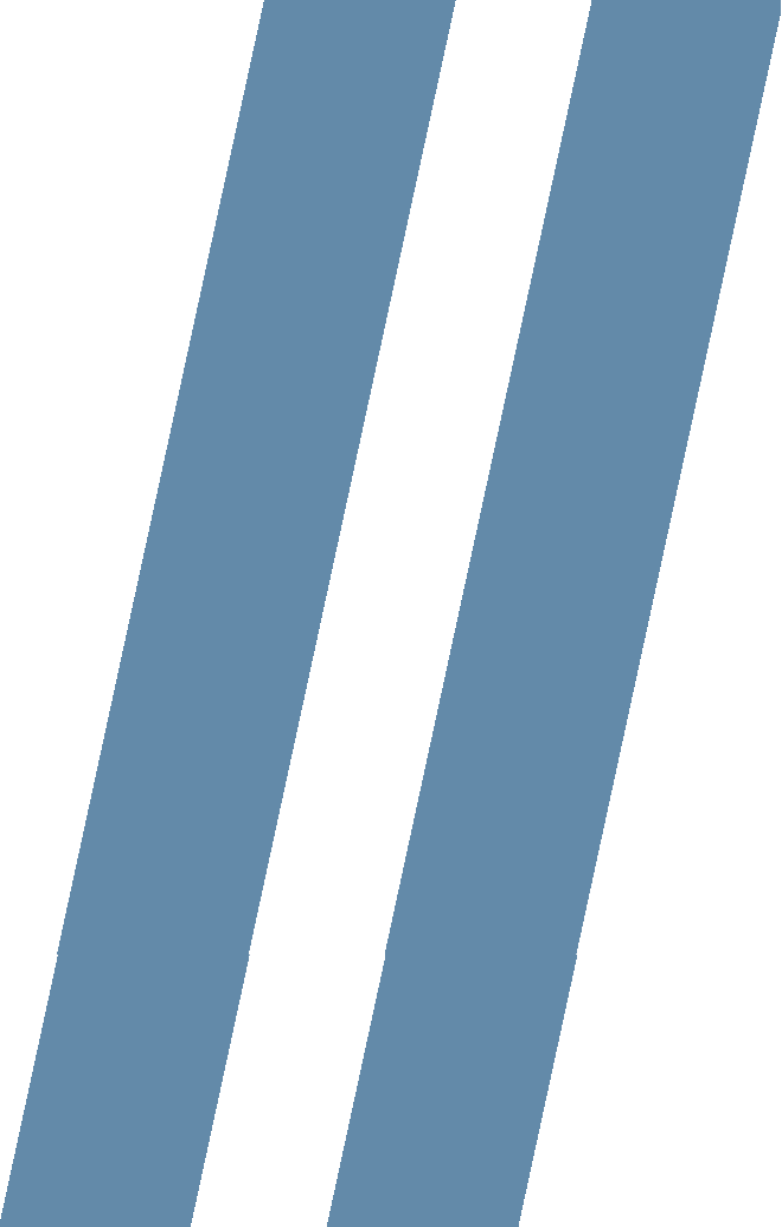 A Peedie Bit About Us

Isbister Brothers was founded by brothers Alfred and John Isbister in 1929. Alfred began working at the age of 15 for a Finstown merchant supplying groceries around the island with a horse and van. After leaving school, John went to Glasgow and was employed in the Barclaycurl Shipyard, Scotstown before moving back to Orkney during the depression years and working for several different merchants.

For the first year of business, the shop was based at Gyron (not far from the existing building) and the building which is still in use today was built by the brothers the following year, by hand, using sand and gravel from Skaill beach.

As a family-run business, it has been passed down and run through the generations that followed. Read More

Alfred’s son Freddie worked in the family business from the age of 15 until he had to leave for the Army at the age of 18. After serving in the army for two years, he returned to work at Isbister’s. In 1967 when brothers Alfred and John retired, Freddie and his wife Renee took over the business and continued to work there until they both retired.

Freddie’s son Tommy began his career working in the Bank of Scotland before he joined the business in 1976. During Tommy’s time as Managing Director, he further expanded the business by introducing the supply of coal and gas, offering gardening services as well as the beginning of ‘Quoyloo Garage’.

Tommy’s daughter Isla Rosie (née Isbister) joined the Company in June 2009 when she started up ‘iDesign’ - offering design and print services. Isla studied graphic design in Glasgow for two years and then went on to gain her BA (Hons) in Applied Graphics with Multimedia Technology. She has many years experience of working in design for print as well as the newspaper industry. Isla’s husband Mark joined the business a few years later as a lorry driver and together they now run the business.

One of Tommy’s other daughters, Fiona Steadman (née Isbister) also works part-time in the shop bringing even more family into the mix. Her daughter Chloe also does a few hours a week in the shop when not in school. It has been a bit of a family tradition that the ‘kids’ in the family get a part-time job in the shop for some extra pennies.


It was never just a ‘shop’

The haulage department of Isbister Brothers also began back in 1929 with the first lorry being just 2 tonnes, transporting animals mainly to Aberdeen.

When the first of the tractors arrived in Orkney and farmers no longer needed Clydesdales, Isbister’s transported many of these off the island. It could often be a difficult procedure as the horses were unfamiliar with being transported and used to lash out with their hind legs.

Pigs were also exported and again proved to be difficult to load with them going every way but the right way. To get them loaded, they placed buckets over their heads and guided them up the ramp on to the lorry.

Nowadays, the haulage is still an integral part of the business but mainly transports agricultural feed, building materials and a variety of other products in bulk loads, full loads and pallets.

As times have changed, the business has adapted and expanded over the years and now offers a great variety of products and services. So whether you are needing a pint of milk, a load of straw or your car fixed, give us a call:

Isbister Brothers began with one grocery van and this expanded to three over time. The vans travelled round the areas of Sandwick, Birsay, Harray, Stromness and Rendall selling groceries to the community.

At a time when many people had very little money, they grew their own vegetables, produced their own milk/cheese/butter and kept hens for their eggs. Fish and pork would be home cured and they would often swap these items in exchange for groceries from the van such as flour, salt, sugar, tea and bacon.

The drivers were Alfred Isbister himself, his son Freddie and grandson Tommy as well as John Breck, Leslie Dick, James Garson, John Seater and Tommy Kemp. Driving the van often meant the men were away from home for days at a time. Alfred used to leave Isbister’s on a Friday morning with the van fully stocked, he would stay with his sister at Fiold in Rendall that night and then set off again on Saturday morning to eventually return home to Quoyloo around midnight.

The life of a vanman was tiring but never dull with its varied jobs from merchant to messenger and during the fifty years on the roads they even faced two van robberies - one when the van was in motion!

The high overheads and unsocial working hours contributed towards the decline in the vans and after more than fifty years of serving the community with the travelling shop, the last van set off for its final trip in 1981.


The lifeboat to the rescue

In January 1955 a major snow storm spread across Orkney and ended up blocking the roads in the community for 10 days. In need of provisions, the Lifeboat came from Stromness to Skaill Beach with bread and butcher meat for the locals. Freddie Isbister along with Jim Linklater (senior), Tommy Spence and Jim Linklater (junior) went out in small rowing boats to meet the lifeboat and bring the provisions ashore. When they landed back on the shore, folk came to the beach to get their provisions.

In 1989, James Wick was carting sand in one of Isbister’s lorries in a local sandpit near Skara Brae when the cap-stones of a tomb collapsed under the front wheels of the lorry. When he cleared away the sand he discovered a tomb containing a sealed and undisturbed sarchophagus.

The tomb was later excavated by archaeologists and they found a stone cist containing unburned bone, a pile of cremated bone and a large pottery vessel with more cremated bone.

James was given a British Archaeological Award following his discovery. 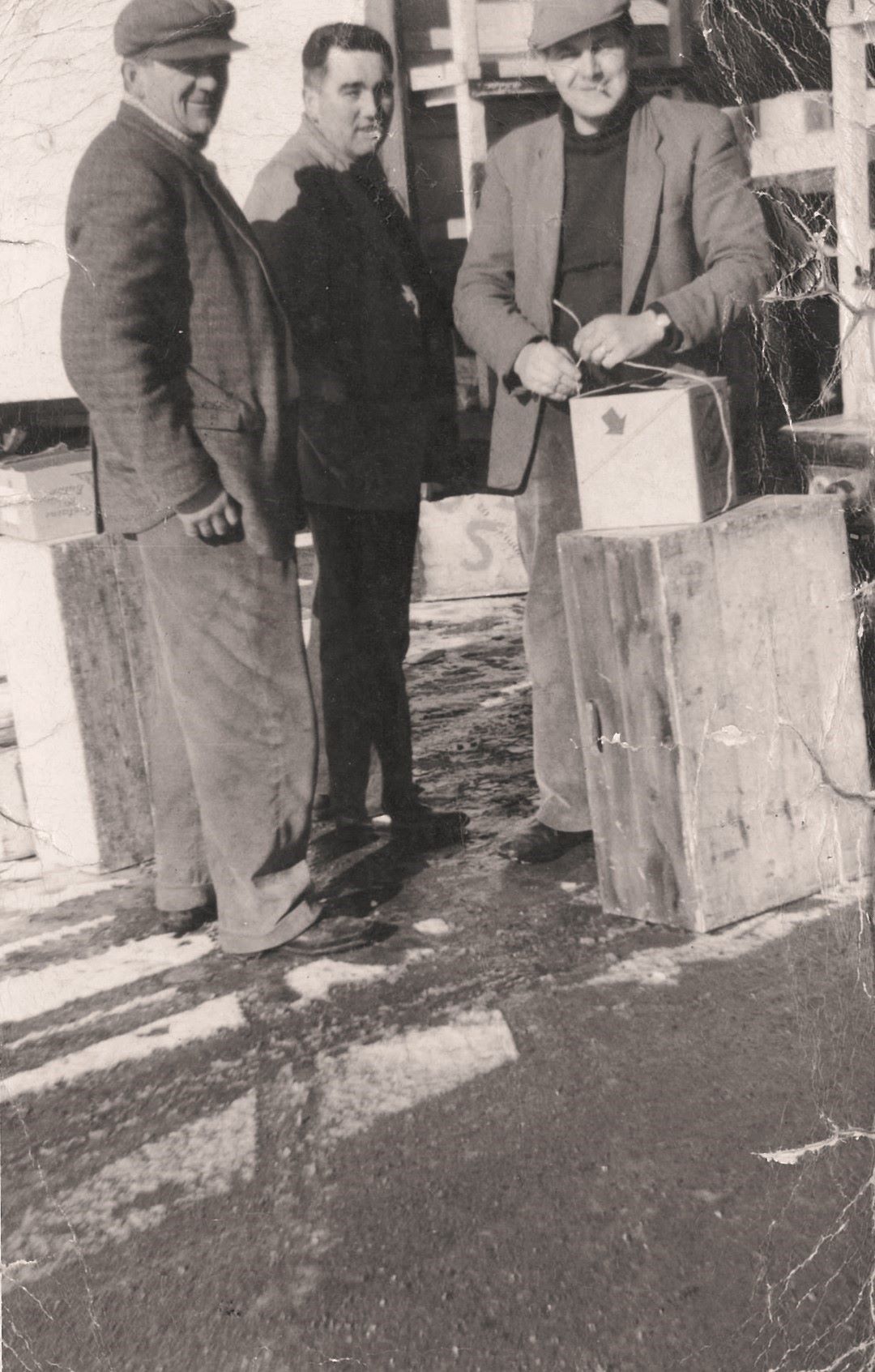 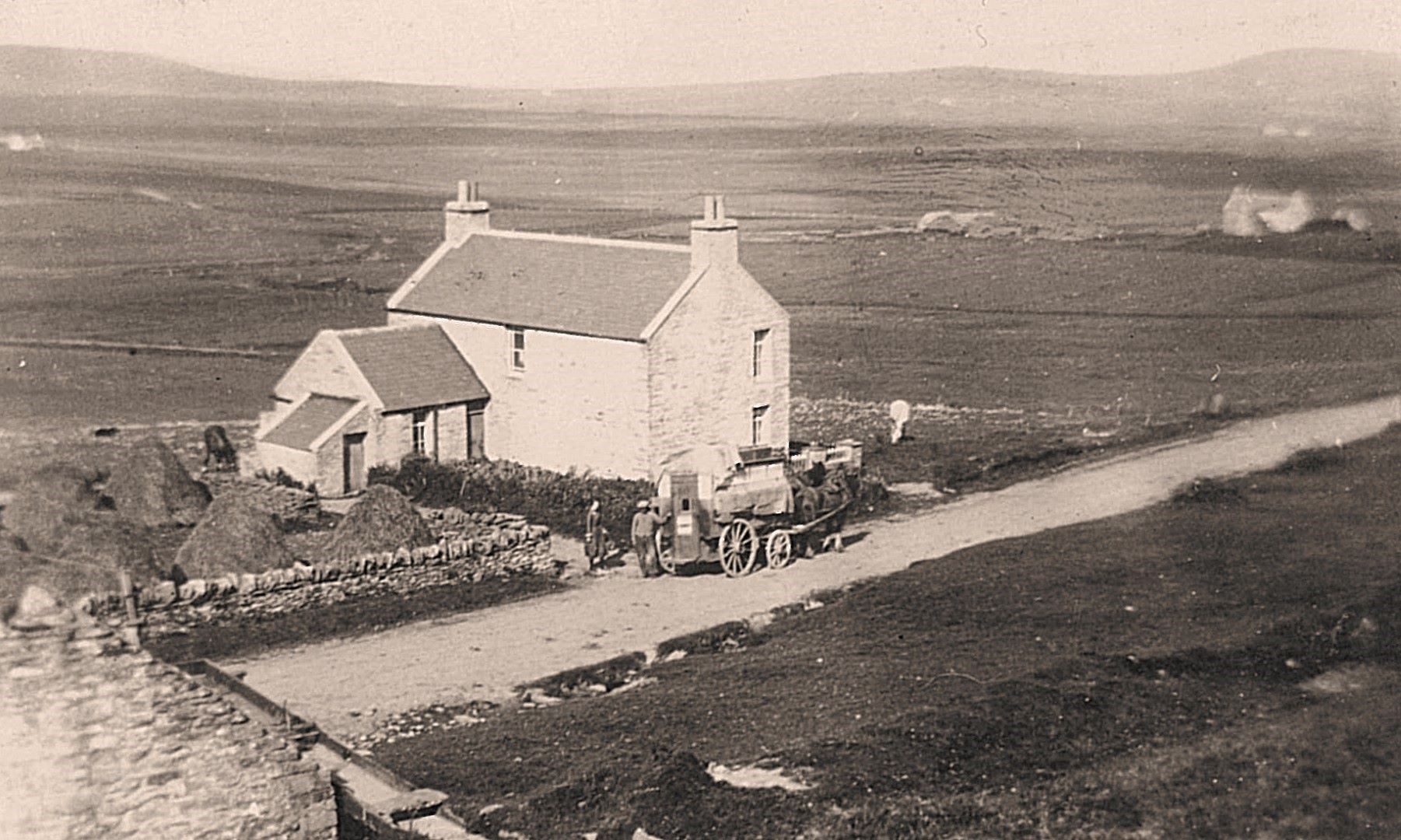 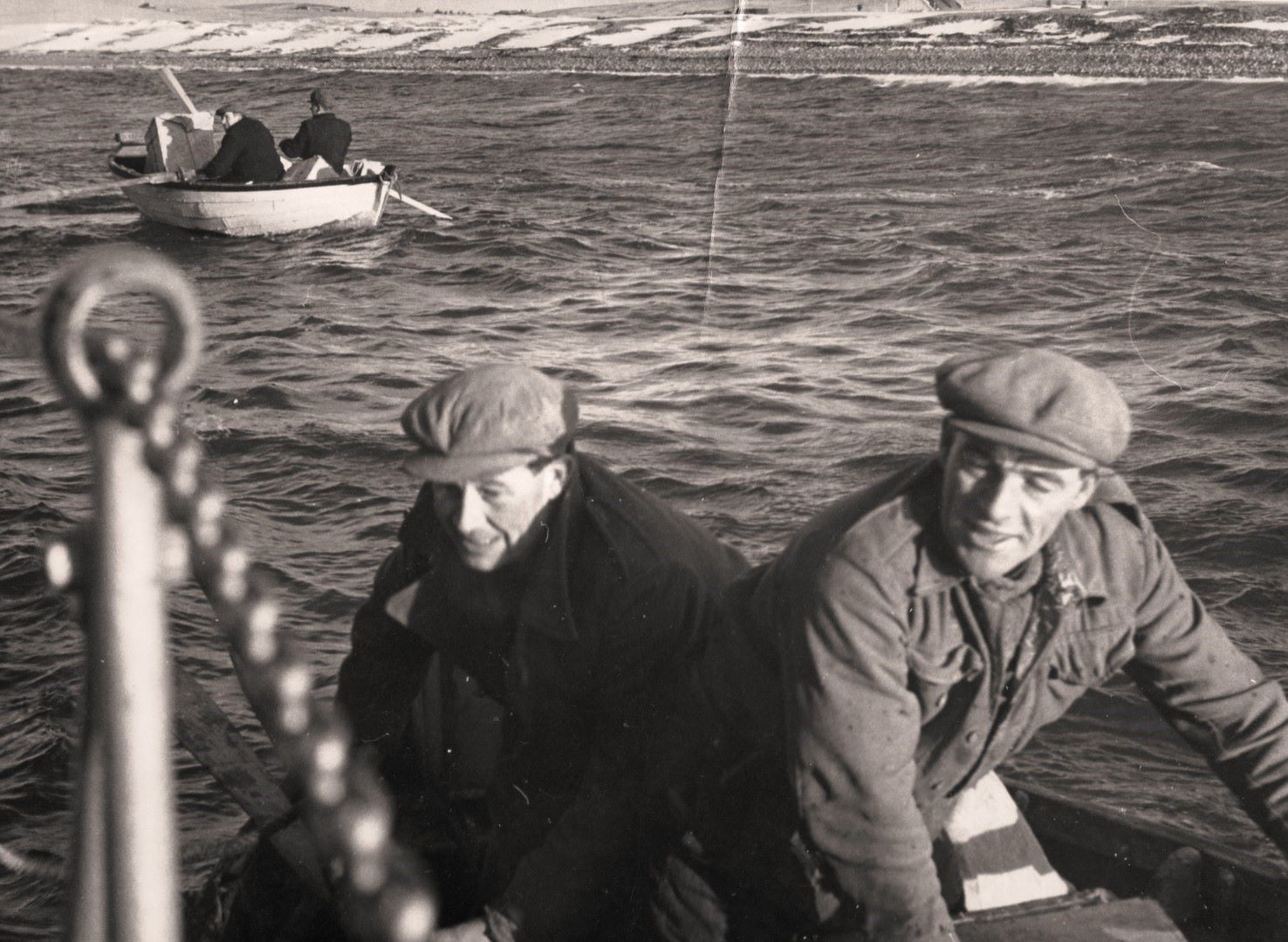 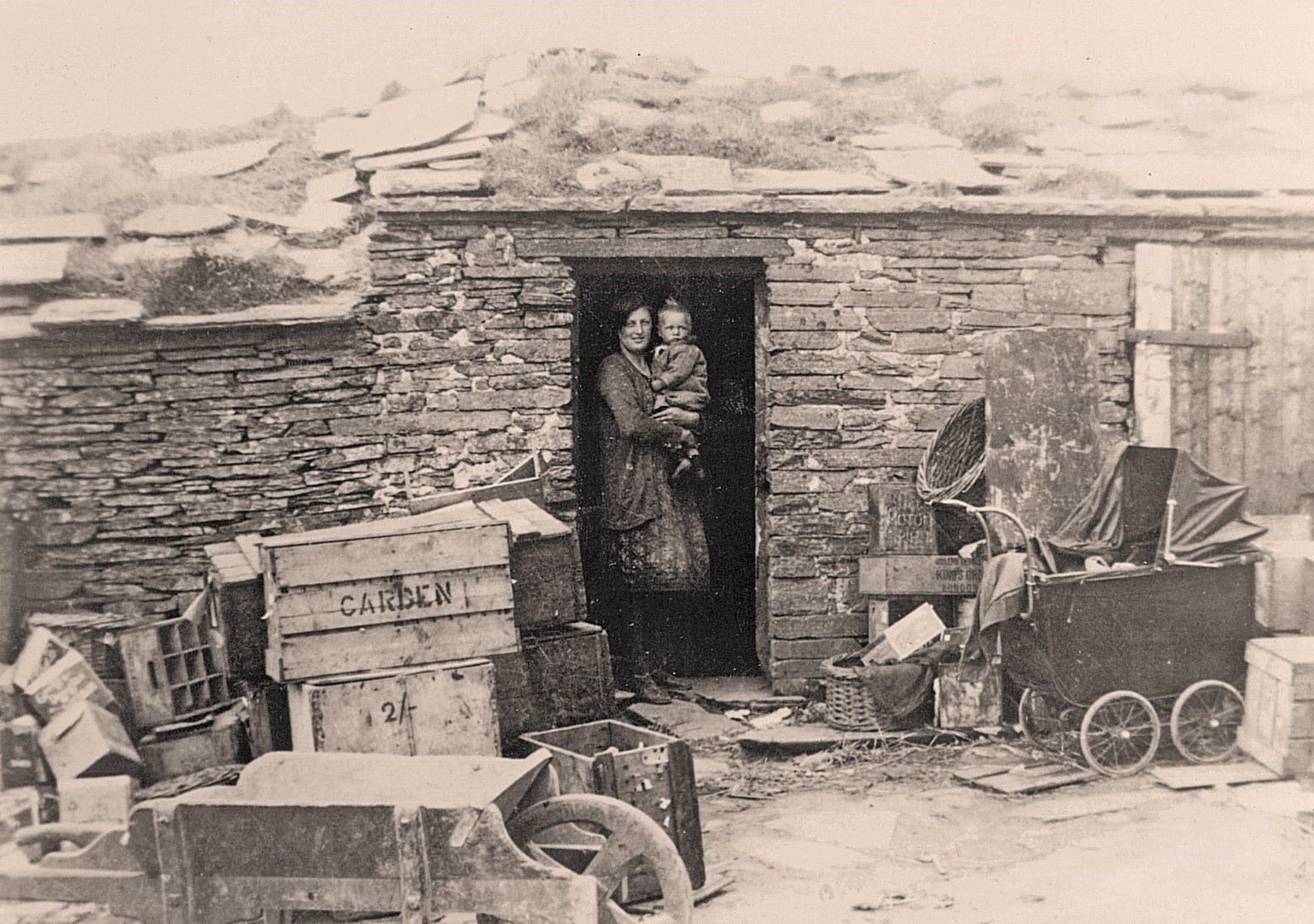 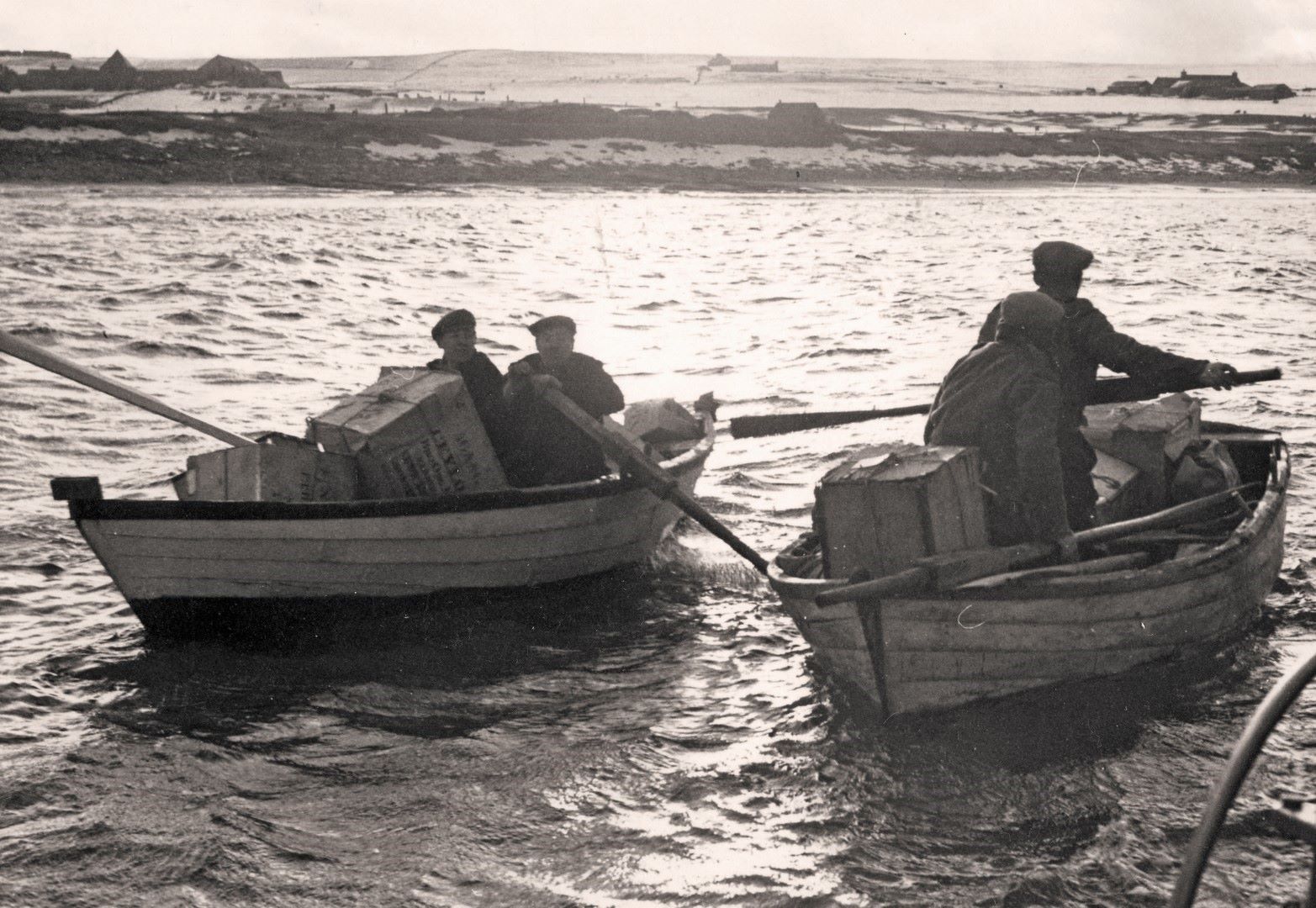 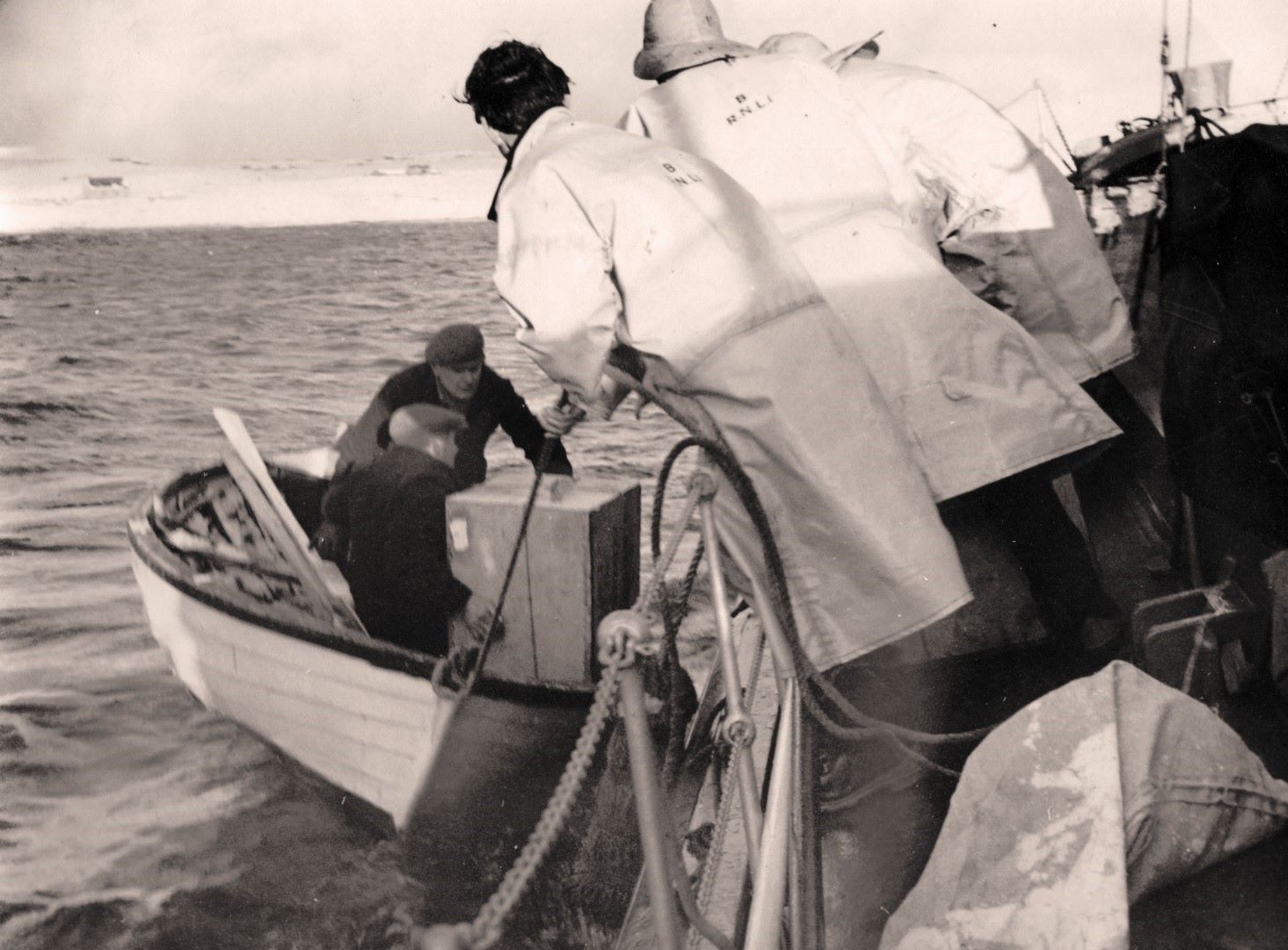